As an Apprentice at Payara, not a day goes by where I haven’t learned something new and intriguing. I’ve been an apprentice with the company since November of 2018 and the experience is, so far, proving to be one of great worth and one that I would recommend to any post college student with a passion for technology.

Why Choose to do an Apprenticeship Over University?

Like most people, I spent half my time at college being told that the best way to get into a successful, progressive industry was to go through University and get a degree. But I’ll be honest, the thought of 4 more years in education and a solid £40,000-£50,000 of debt by the end of it wasn’t very appealing to me. And truth be told – there’s another (arguably better) way to do it.

Payara offers a Degree Apprenticeship program, which has given me all the benefits of a University education paired wonderfully with the benefits of full-time employment. One of the main bonuses is the 4.5 years of industry work experience that will give me a massive leg-up in the industry of software engineering and a large head start over what a path through University would have given me. Additionally, the Payara Malvern office is close to my home, and with a basic UK Apprentice salary in the range of £14,560 – £24,000? It’s a no brainer!

How do You Get into an Apprentice Program?

Getting into an Apprenticeship program works a lot like getting an actual job, the only difference is that there’s a University course alongside it. So, I filled out my application, attached my CV and waited for interview offers to be sent out! Over this period, the Payara HR team stayed in close contact, sending out weekly coding puzzles and information about the company. They were also happy and willing to answer any questions regarding the position and things relating to it. Come July 22nd, to my joy, I was offered an interview for the Apprenticeship. The interview was a real job interview, split into a section assessing coding ability and an interview with HR to go over my CV, previous employment and the like. It did require some preparation, however I remember Payara providing plenty of notice before the interview day came. A few more days of waiting and I was relieved and ecstatic to find out that I had gotten the job and would be starting the following November.

My Experience as an Apprentice with Payara 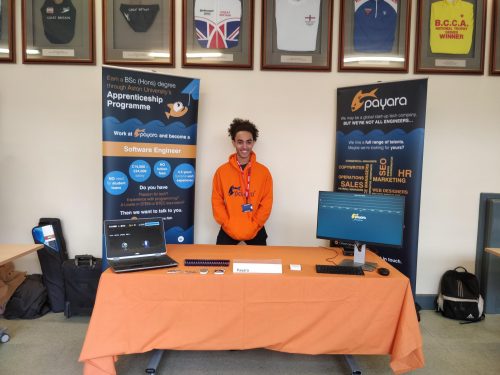 The University held an initial “Fast-Track” section over the course of 7 weeks at the start of the Apprenticeship to gauge how much everybody in the course already knew and how well we’d be able to cope with the workload. During this time, there was plenty of opportunity to learn about new things, meet new people and really push myself in a positive way to become a better employee and a better person in general, I feel. The 7 week period ended with a final week project which required us, in groups of 3-5, to develop a small web application and give a presentation on it. While this was slightly stressful at times, I found it to be a really fun and educational experience which taught me plenty about teamwork and time management along with a large amount of new programming skills which are widely applicable to my role.

As for actual work in the company, progression has been fast but comfortable. I’ve been following along a tailored training program and slowly shifting over to doing work on the Payara Server source code itself (and it’s only been a few months!) The training program has taught me a large range of skills including Linux console commands, Network coding in Java, Application Server logic, testing pipelines – The list goes on. But ultimately, the tight-knit community nature of Payara has been what really makes it an enjoyable role to have. All employees have a genuine care for the product and for each other, and everybody is set on making sure the apprentices have settled in nicely and that we can keep up with the work that we’re set.

So even though at first, a 4.5 year apprenticeship seemed like a daunting commitment, I’m confident and happy in my position at Payara. Like most post-college students, I was left asking myself if I’d made the right choice…

So Did I Make the Right Choice?

Absolutely. And, like I said earlier, I would highly recommend a Degree Apprenticeship to residents in the UK looking for an alternative (and arguably better) route into the software industry.

More information about the degree apprenticeship

and other employment opportunities

can be found here: