I started out as any other student doing A-levels, being force-fed the idea that to have any semblance of success in life I have to be looking at universities, which I partly believed. After passing my A-levels and planning to take a gap-year to mull over going to University, worrying about the £40,000+ debt once I finish, then the job hunt, where you are competing with hundreds (if not thousands) of starry-eyed graduates that have the same degree. What I quickly learned about the IT industry, however, is that a degree doesn’t tell a employer how good you are at writing code, because in the industry, experience takes precedence. 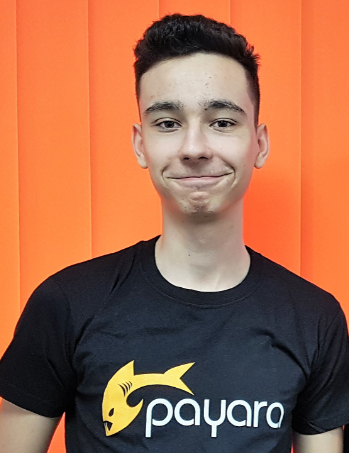 Its not unheard of for employers to hire self-taught programmers who managed to make a decent software portfolio for themselves over fresh graduates, but a buggy web-app is not going to wow an employer, either. I knew I wanted to write code for living, but wasn’t sure how I was going to achieve that, maybe a brand new Twitter, cool new website, or a epic new game? That’s where many people go and fall flat, if they don’t get fed up with the overwhelming workload, which is often under-estimated. This was until my computer science professor emailed me a link to a Degree Apprenticeship with Payara, it felt too good to be true whilst reading it! A job, experience, and a degree? This wasn’t just a jump-start to a software engineering career, but a pole vault!

Now, I’ve had my misconceptions about apprenticeships, and if anyone mentioned them I imagined people that failed their GCSES, but this isn’t the case at level 6-7 Apprenticeships. An apprenticeship is not any easier to get into than university, maybe even harder, but don’t let that put you off, since it is worth it if you have the passion for what you want to do.

Then the wait began, which got me thinking I wasn’t accepted. I kept thinking surely it doesn’t take this long, maybe I was so bad they hoped I’d forget and find something else to do?! But with much relief I got the email saying I was accepted! After sending some documents back and forth and signing some things, I started as an Apprentice Java Developer on the 12th of November 2018, a milestone for a life-long career.

Working as a Developer

You may be thinking, ‘He’s only an apprentice!’ well, yes, but at Payara, an apprentice is treated the same as a ‘real’ (very heavy air quotes) developer. Maybe I’m not as experienced, but that comes with time. My first real contribution was some documentation on a new feature that was added in the latest patch, someone somewhere using Payara Server might glance over it time to time, which made me want to make it the best documentation there is, clear and useful, because it might help someone somewhere using Payara products, and the happier they are using our products the more popular Payara becomes. I’m excited to be part of the solution.

I might not have many other software companies to compare to, but I know a good one when I see one. Payara is growing very fast, the culture is very relaxed, and when the CEO is in office, he sits at the desk next to me. A Microsoft employee wouldn’t dream of sitting next to Bill Gates! The company structure is pretty broad, meaning there is a lot of communication, which I’m sure the project manager is thankful for, and I don’t have to jump through hoops to get things done.

Don’t think that Payara is just some little office in Malvern, though, its actually a global company. Only around half of the whole team is in the office and the rest are spread out among 14 other countries!

If you join the Java community, you’ll be sure to hear about Payara! If you’re a UK student looking into a technical coding career, consider an apprenticeship program with Payara. Thanks for reading about my experience… but now I’m off to fix some more bugs!