It has to be said that the people in the UK office do like to BAKE!

I think the popularity of shows on TV like The Great British Menu and Bake off really inspired many of the guys to have a go – and they found that not only did they enjoy the challenge they loved that they could eat the result…..so it wasn’t long before many baked goods and treats were making their way in to the office. Making a cake involves passion and creativity which we have in abundance in the UK office …but a single person cannot eat an entire cake on their own! It started with one cake a week that was proudly brought in to share …but this soon snow balled in to an almost daily event and eventually as everyone’s waistlines and risk of obesity expanded to bursting point we had to say enough is enough….it seems you really can have enough of a good thing!

Baking Buddies was the answer…..a baking Rota that is self-managed by those that love to bake. Sharing baked goods in the office was now under control again and limited to one day every 2 weeks.

Anyone can sign up to Baking Buddies and will be allocated a ‘slot’ on a day when they can choose what they want to bring in and share with everyone else. All those who are Baking Buddies can sample the different bakes for free – those who don’t want to bake but enjoy eating can participate for the price of £1 ‘buy’ a slice of happiness…..and that £1 is then donated to a charity at the end of the year – so it really is a Win , Win, Win situation – cake is enjoyed in moderation, bakers can plan their creative masterpieces to impress their colleagues, a charity benefits from the donations, and we can make the world a better place by eating something delicious.

Getting the Cakes into the Office

As you can imagine not all cakes have made it into the office – one has been dropped on a driveway and embedded with gravel, one was thrown into a bush and one ended up in pieces in the car park…..it seems the challenge is not only baking the cakes but also getting them to the office in one piece! 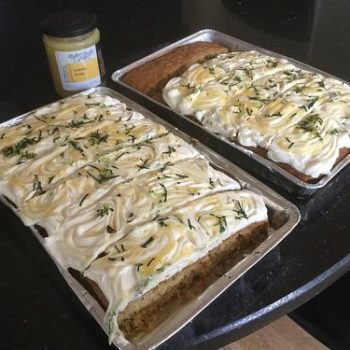 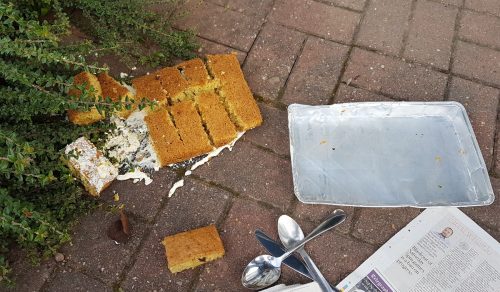 We even held our own Bake Off – anticipation of the event was high and, on the day, the most amazing creations were brought in for display and sampling. A local pastry chef was invited to carry out a blind judging and the grand prize for the winner was a Bake Off Badge – I wear it with pride…. although there are quite a few who still hold a grudge! 😉